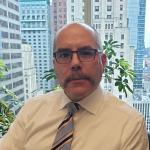 Richard Dolhun is a Director in the Agriculture Program of the Emerging Markets Investors Alliance (EMIA), where he focuses on the food industry. He also helps to lead EMIA’s engagement with stock exchanges.

Previously, Richard spent 13 years in Toronto and Tokyo in the food and finance industries progressing through roles in finance, product development, and strategy. Leveraging his learnings and experiences in industry, he then spent  another 13 years in fundamental, bottom-up, cashflow-focused, buy-side equity analyst roles for AGF Funds and Westwood Holdings Group, both based in Toronto.

Richard earned a B.A. and an M.B.A. in finance at the University of Manitoba in Canada. He also studied Japanese at Nagoya Gakuin University in Aichi-ken, Japan, where he developed his fluency in Japanese. Richard holds a Chartered Financial Analyst (CFA) designation.