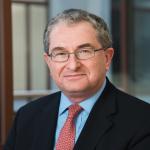 Arturo also carries out and publishes research in international finance; provides consulting services to legal and financial firms, as well as to U.S. government agencies and multilateral institutions; serves as a Dispute Resolution Arbitrator for the Financial Industry Regulatory Authority (FINRA); and has been a long-time member of the Board of Directors of the Tinker Foundation. In 2020, the White House appointed Arturo to the President’s Advisory Commission on Hispanic Prosperity.

Arturo holds an M.A. and a Ph.D. in Economics from the University of Pittsburgh.