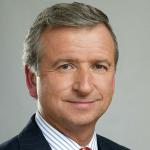 Felipe Larraín Bascuñán is a member of the Board of Advisors of the Emerging Markets Investors Alliance.

Larraín served as Chile's Finance Minister from 2010 to 2014, and again from 2018 to 2019. He is currently Professor of Economics at Universidad Catolica de Chile, and member of the Executive Board of the Latin American Center of Economic and Social Policies (CLAPES UC), which he directed between 2014 and 2018. Larraín is also a member of the UN Leadership Council for Sustainable Development and a member of the Lancet Commission for COVID-19.

Larraín’s government economic advisory work extends well beyond Chile; he has been economic advisor to the governments of Bolivia, Canada, Colombia, Costa Rica, Dominican Republic, Ecuador, El Salvador, Guatemala, Jamaica, Mexico, Nicaragua, Paraguay, Peru,  and Venezuela. He has also served as a Fellow of the World Economic Forum and a consultant to the World Bank, the Inter-American Development Bank, and the International Monetary Fund (IMF). Between 1997 and 1999, Larraín was the Robert F. Kennedy Visiting Professor of Latin American Studies at Harvard University.

Larraín’s areas of research include, among others: economic growth and development; emerging markets and Latin America; fiscal, monetary and exchange rate policy; trade policy and warfare; sustainable development and climate change; economies in transition; and globalization. Larraín has published 15 books and some 140 articles in specialized journals and books in Latin America, the United States, Europe and Asia. His book “Macroeconomics in the Global Economy”, written with Professor Jeffrey Sachs, has been translated into ten languages, including German, Chinese, Spanish, Italian, Japanese, Portuguese and Russian.